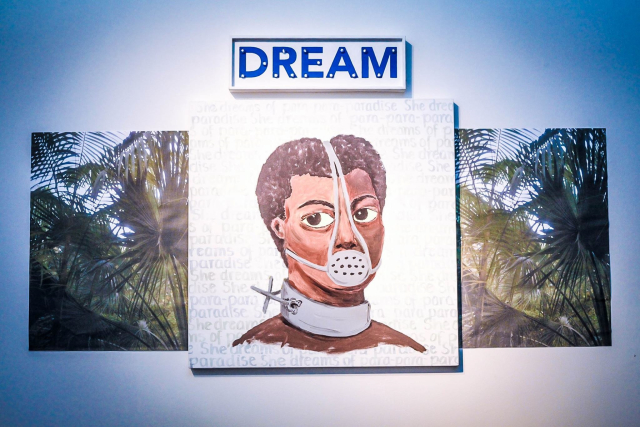 Vicki Meek, Professor of Cultural Equity in the Arts in the Arts Extension Service's Online program, will open her retrospective exhibition November 16-17, 2019 in Houston, Texas. Vicki Meek: 3 Decades of Social Commentary will feature a variety of mixed media works created by Professor Meek over the last 30+ years, all of which explore her lifelong investigation of social conditions affecting the African American community. Houston Museum of African American Culture (HMAAC) will host the exhibition through January 19, 2020, and will present several community conversations about selected topics represented in the work. In addition to the HMAAC exhibition, Professor Meek will open a separate exhibition at Transart Foundation for Art and Anthropology that will feature an installation entitled “Vulnerable” that examines the psychological and physical changes she experienced after having her thyroid removed.

Professor Meek lives in Dallas but has maintained an artist presence in Houston since moving to Texas in 1980. Her relationship with the Houston arts community has involved working with Project Row Houses, Community Artists Collective, Diverseworks, and Barnes Blackman Gallery. Her retrospective will continue in 2020 with an exhibition at Community Artists Collective and a community engagement project at Project Row Houses.

Artists often find it necessary to earn a living in some way other than selling art. Professor Meek knew as an MFA student at the University of Wisconsin that the chances of making a living as a practicing artist in America were limited, so she decided to utilize other talents. She first taught on the university level for several years before settling into the Arts Administration field. Professor Meek worked as an arts administrator on the state and local level, which included working for a state arts agency in New England, a local arts agency in Texas and running a non-profit visual arts alternative space ("plus a few other jobs along the way!"). But she never stopped making art.

For most of Professor Meek’s art career, she created site specific installations, but in between these commissioned projects, she made discrete works for group exhibitions around the country and beyond. A video for her retrospective is being produced by filmmakers Bart Wiess and Christian Vasquez that documents the many installations Professor Meek installed for spaces as diverse as The Museum of Fine Arts Houston to the University of Texas at Arlington to Centro Cultural de la Raza in San Diego.

Although Professor Meek is an independent curator, she will not be curating her own exhibition. Dr. Lauren Cross, an up-and-coming curator and professor of Art History at the University of North Texas, will curate the HMAAC exhibition and Dr. Surpik Angelini, founder of Transart Foundation made the selection of “Vulnerable” for her space. Both curators will write essays about their respective shows for a catalog and brochure.

Professor Meek has been a working artist since 1977, making work that addresses issues around social justice, racial marginalization, historical erasure and memory, all through a lens of African spirituality. Using visual language that combines Yoruba cosmological ideographs, text and contemporary imagery, she challenges viewers to question conventional historical offerings, giving them new perspectives on African American history that is backed up by extensive research. Her topics have ranged from difficult issues like state-sanctioned violence against black people in the wake of the Black Power Movement of the 1970s to the devastation caused by the horrific Middle Passage period of the Transatlantic Slave Trade. Professor Meek is also very interested in exploring how racism has manifested throughout the African Diaspora and has created installations that extend her visual conversation beyond the borders of the United States, particularly looking at enslavement’s after effects in the Caribbean, Central and South America.

A retrospective provides a great opportunity for an artist to take stock of their aesthetic trajectory, and Vicki Meek: 3 Decades of Social Commentary has certainly afforded Professor Meek this unique experience. As she revisited work made in the late 1980s, it became very obvious to her that she has been consistently examining race, memory, and history, albeit from several perspectives. Her primary goal over the arc of her career has been to open up a dialogue on how history has been used to manipulate political thought and to create alternative narratives about African people. Professor Meek spends an inordinate amount of time researching her topics, often accessing rarely utilized international databases and texts. She typically may spend 4 to 6 months on research for a project before executing its construction. It is also important to her that the installations be interactive, often allowing viewers to provide feedback within the context of the work. She sometimes uses the feedback as the inspiration for new work.

Another feature of Professor Meek’s installations is the use of multimedia. Sometimes there is sound, sometimes video. There may also be the sense of smell involved, or touch. The idea is to fully engage viewers as more than simple spectators because her belief is that the more directly involved a person is with a work of art, the deeper the experience. She is definitely interested in people walking away from her work with a spiritual connection to both her and the work.

Vicki Meek: 3 Decades of Social Commentary is both an exciting and nerve-wracking undertaking for Professor Meek. The production of a major catalog and video minidocumentary, along with preparing older works for their reappearance in a gallery after years in storage or on some collector’s wall, is exhausting, but also instructive. There is no better way to understand the visual arts world than through one’s own production history within it. By mounting a major retrospective, Professor Meek joins many elder artists in providing a documented artistic journey for future generations to understand the development of a particular aesthetic.

Learn more and sign up for Cultural Equity in the Arts this fall here. Read Professor Meek’s blog here.