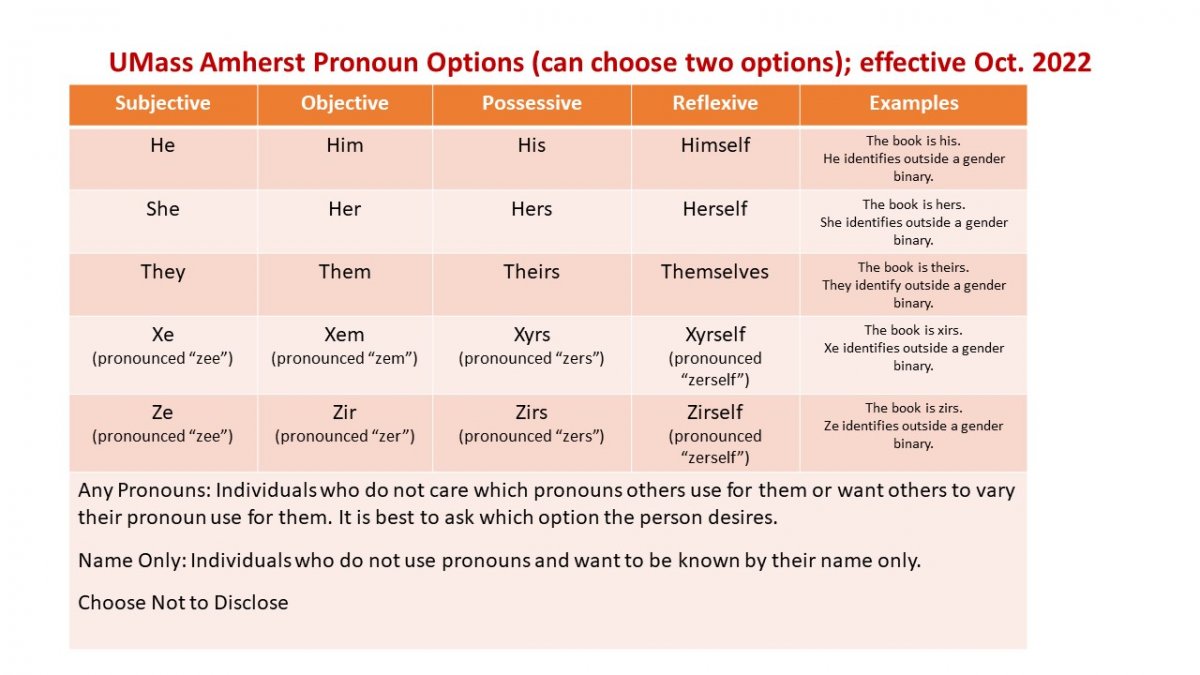 What is a pronoun?

What are gendered pronouns?

What are non-gendered or nonbinary pronouns?

Some nonbinary individuals use "it/its" as their pronouns and ask others to refer to them this way. But because “it” has historically been used as a slur against trans people, the word should not be used outside of the individuals who ask to be known by "it."

Why should I be asking people what pronouns they use?

It is important to ask for pronouns because you cannot assume how someone identifies their gender based on their appearance. Using the wrong pronouns for someone may lead them to feel disrespected, invalidated, and marginalized.

What is the best way to ask someone about their pronouns?

You can simply ask, “What pronouns do you use for yourself?” or “What pronouns should I be using for you?” Asking for pronouns may feel awkward at first, but getting someone’s pronouns wrong may be even more awkward.

What if I make a mistake?

It’s okay! Everyone slips up from time to time. If you use the wrong pronoun for someone, you can say something like, “Sorry, I meant 'they,'” and continue your conversation. Avoid over-apologizing, which further creates an awkward situation.

What if I hear others making a mistake?

In most cases, you may gently correct the person who made the mistake without further embarrassing the individual who was misgendered. You can say something like, “Actually, Jadzia uses ‘they’ for themselves.”

Suggestions for Instructors to Respect the Gender Identity of Students

Students can go into SPIRE (under "my personal information") and enter their pronouns, which will appear on class rosters, advisee lists, the student services center, and other administrative pages in SPIRE.

In small classes, instructors may elect to use various methods to give students the ability to indicate their pronouns, including:

In large classes, instructors should avoid gendering students unless you know how they identify their gender. Suggestions for how to call on students without gendering them:

Instructors may choose to have a name and pronoun policy on their syllabi, such as the following:

Resources on How to Use, Ask, and Share Pronouns