Our work concerns microbes and their interactions with the environment. Microbes are extremely diverse, associated with all living organisms and involved in all of earth’s biogeochemical cycles. Specifically, I am interested in understanding how climate change affects soil microbial communities, and then applying results towards modeling and predicting microbial feedbacks to climate and improving biofuels.

Current Research
Microbes are everywhere, living in complex communities where they are affect and are effected by their environment. The microbial role in ecosystem function is difficult to define partly because microbial functions feed back at many scales. At the single cell scale, they sense and respond to their environments through two-component regulatory systems. At the population-level scale, there are myriad chemical inter- and intra-species communications that control group behaviors. At the community scale, composition changes with environmental factors, altering nutrient pools and process rates. My research program is intended to address this problem by addressing the following questions: How are microbial community structure and function related? What interactions with the environment or with other organisms control microbial activity? What can be gained or lost from examining natural versus controlled, laboratory systems?

The acceleration of global warming due to terrestrial carbon-cycle feedbacks is an important, though poorly defined, component of future climate change. A more complete understanding of how global warming will affect carbon-cycle feedbacks to the climate system is central to model projections of future climate, especially in light of recent evidence which suggests that what was previously understood to be stably stored soil carbon is, in fact, reactive. We are working at the Harvard Forest on a long-term soil warming study to investigate the role that soil microbes play in effecting this long-term, non-linear response of soils to warming, the net result of which is a dramatic loss in soil carbon. Our current hypotheses are that long-term soil warming is causing soil carbon to become more physically and biochemically available. We are using microbial physiology and genomics of bacterial isolates to begin to test this hypothesis, focusing on a culture collection of over 500 isolates. We are also employing metagenomics, metatranscriptomics, and various biochemical methods to establish the mechanisms by which microbes are increasingly albe to access and metabolize a dwindling pool of soil carbon in a warming world.

Bacteria also vary widely in efficiency, and high efficiency is gained as a tradeoff with growth rate. Carbon use efficiency (CUE) is the C incorporated into microbial biomass, with the balance respired as CO2, a potent greenhouse gas. Efficiency varies widely across the diversity of microbial life, and can have large effects on magnitudes of microbial feedbacks to climate. Studies aimed at capturing the microbial and metabolic diversity in a community are increasingly based on culture independent methods like metagenomics, which in turn rest on database annotation of function. With a few notable exceptions, our understanding of the genes associated with trophic strategy has been considered without acknowledgement of adaptations unique to terrestrial bacteria. This work explores a fundamental theory of biology, that traits associated with the tradeoff between growth rate and efficiency are ecosystem specific. This systems biology question will lead to definition of genomic markers that may predict competition in complex communities. 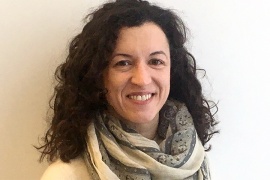