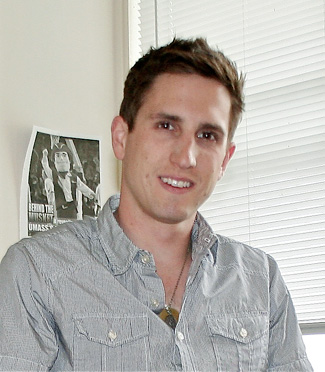 Will McGuinness, class of ’10, had been living and working in New York City less than a year when he heard – via Twitter – that the Huffington Post needed a senior editor for their college section. He hunted down Arianna Huffington’s email address, got an interview with her and she hired him the next day.

McGuinness had a plan. He told Huffington during a phone interview that he wanted to run a college section that doesn’t treat higher education like a “bubble,” separate from the rest of the world.

“Education is political. It’s all kinds of different things. Everybody’s got an opinion on what it should do, who it should serve and what position it plays in the future of our country.”

In addition to a plan, McGuinness also had an “in." As editor-in-chief of the Massachusetts Daily Collegian his senior year, he worked closely with the popular online newspaper when its college section made the Collegian one of its first content partners.

Although his first day at the Huffington Post was in April 2012, McGuinness has been editing news since the eighth grade. In addition to the Collegian, McGuinness served as editor-in-chief for his middle school paper and for his high school paper.

McGuinness did internships all four years of college– sometimes three or four in one year. These include stints at the Daily Hampshire Gazette, the Giraffe Media Project and the Herald News in Fall River, his hometown. After graduating and before starting work at the Huffington Post, McGuinness worked for such outlets as the Cape Cod Times, Dow Jones and Company and CBS Local in New York City.

After working at HuffPost for a year, McGuinness accepted a position as vice president of content at Odyessy in 2013. in 2014, he found himself working in higher education at Columbia University. After three years of working in social media and marketing, McGuinness is now the Director of Marketing and Digital initiatives at Columbia.

Years of reporting taught McGuinness the importance of sharing ownership of a story with its subject.

“When you interview a lot of people and you’re not afraid to really listen to them, you’re not afraid to ask questions beyond what you already thought your article was going to look like, then people stick with you in a major way” he said. When he interviewed the mother of Carl Joseph Walker-Hoover, an 11-year-old Springfield boy who hanged himself after being the target of anti-gay bullying, McGuinness began with just one request: “Tell me about Joe.”

“That’s the thing; you have to show people that first of all, you are interested in their story enough that you don’t think it’s your own,” McGuinness said. “You don’t see the story as yours as a writer, you see the story as theirs as a participant in it, and that you’re just simply writing their story.”