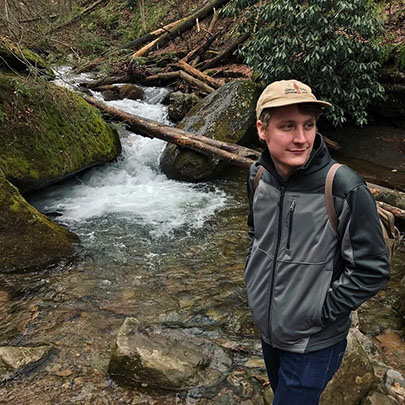 Sean Sullivan ‘10 had a clear idea of what he wanted to study in college - journalism. Politically aware as a teen, his “particular allergy for bullcrap” inspired his focus on criminal justice, state government, and politics in relation with his reporting.

UMass Amherst was Sullivan’s school of choice for two reasons: the large library and the daily newspaper. A thirst for knowledge and eager to gain experience, he was already on staff at ​The Massachusetts Daily Collegian ​before classes started his freshman year.

Although initially intimidated by the large size of the school, Sullivan found his niche quickly. He made most of his good friends and connections at UMass through the journalism department and related extracurriculars. He even met his wife, Rosie Walunas, through working at the campus TV station, UVC-TV19.

“There is so much you can do at such a large university to make it a smaller, more tight-knit community,” Sullivan said, “and campus media is the best thing I did as a journalism student because I immediately applied what I was doing in the classroom to a product that was consumed and critiqued by the campus.”

From college, Sullivan used the connections he made as an undergraduate journalist to start professionally working in the field. One connection was with MassLive, a news-media company based out of Massachusetts, at which Sullivan was offered a position working full-time before he graduated. He took it, and this decision in his career path resulted in him failing an elective French course his senior year. Forced to graduate a semester later than intended, the small academic hiccup didn’t stop Sullivan from doing great journalistic work.

Sullivan graduated with a degree in journalism and anthropology and received a fellowship for young journalists at the Poynter Institute in 2009. In 2018, he was a finalist for the national Livingston Awards for Young Journalists and a 2018 Harry Frank Guggenheim reporting fellow at John Jay College of Criminal Justice in New York.

When asked what he thought the most important story of his career was, Sullivan pointed to his work “Death and Dysfunction”​ for which he spent 18 months investigating New Jersey’s troubled medical examiner’s system with a colleague. Upon their findings being released, the NJ governor called for wholesale reform of the system, and new legislation was passed in the state as a result of his hard-hitting journalism.

“You need to be curious about the world you live in, you need to be very skeptical about the information in front of you, and you need to know how to ask difficult questions,” he said. “Journalism gives you a license to ask people questions. The press pass is a kind of passport to all sorts of places you wouldn’t have the guts to go otherwise.”

Currently, Sullivan is a writer, reporter and multimedia journalist based out of New Jersey. He works for NJ Advance Media where he covers criminal justice and state government for NJ.com and The Star-Ledger newspaper.