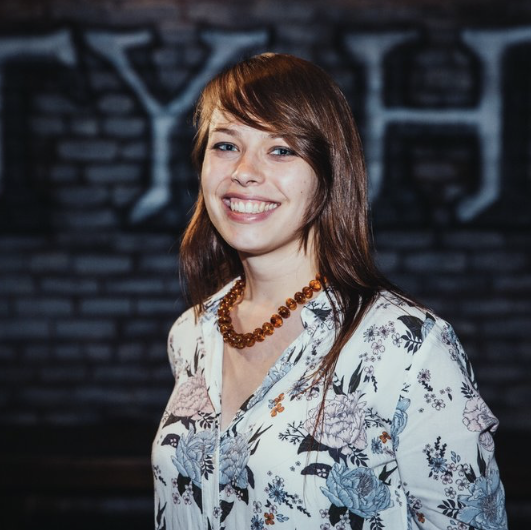 For Rosie Walunas, class of 2011, the art of storytelling expands well beyond the bounds of a page.

“With film, the formulas are unlimited,” says Walunas. “With writing, especially newswriting, there can be a day-to-day formula.”

Walunas began studying at UMass in 2007 and knew exactly what she wanted to do from the start. “I knew I wanted to study film and journalism right off the bat,” said Walunas. “I always watched documentaries as a teen on my own accord.”

She soon joined UVC-TV19, the student-run, campus television station. She began participating immediately, familiarizing herself with the equipment and obtaining her own camera. Around that time, she had her first opportunity to create something special.

“There was a student strike around this time of the year, so I took my camera out and documented the whole thing,” said Walunas. “I realized, ‘Wow, I’m making a documentary!’ I hadn’t put it together until afterwards.”

Walunas had the pieces to create her first documentary. She started it that same freshman year and finished the film her subsequent year as a sophomore. But, it did not stop there. Walunas continued to learn about filmmaking and pursued her passion for documentaries and verité, a genre of documentary that emphasizes nature and realism. She says that “documentaries are this medium beyond a film. When people think of film they think of non-fiction film.”

Walunas has since taken her talents to multiple places, and began working on multiple projects as an editor and a producer. She has worked on series for TV, like “TIME: The Kalief Browder Story”, which explores the tragic story of a young man who spent time in jail for a crime he did not commit. She has worked on a variety of projects, including her favorite “No Passport Required,” which follows chef-host Marcus Samuelsson as he travels the country sampling the different flavors of various immigrant cultures.

“I grew up cooking with my family a lot, and seeing that for so many different people was a great experience for me,” she said. “That’s what’s breathtaking about it, you’re going through this life experience with them. I could really connect with that show.”

For Walunas, that is an aspect of journalism she wants to emphasize. That storytelling is not one dimensional and it can be so beautiful outside of the written word.

“The little details get lost,” she said. “We should be looking into these people’s eyes and be seeing the glimmer, seeing what their lives are truly like day in and day out.”

Walunas implements that same ideology in all of her work, taking a heavy focus on the human element to tell a captivating story. Today, Walunas wants to create verité documentaries of her own, and continues to work for a non-profit called Art21, which captures the stories of artists throughout the country, and can be seen in her film, “The Monolith.”

Links to some of Rosie’s work:
Time: The Kalief Browder Story
No Passport Required
The Monolith

This profile was written as a part of the 2019 Alumni Spotlight Series by students in the Writing for Public Relations course.