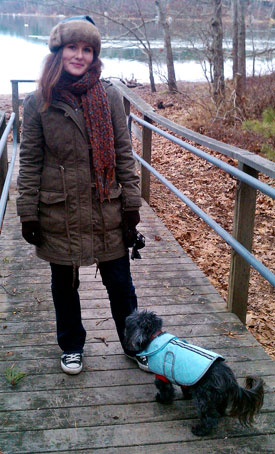 Molly Quinn, class of '05, is the author of the popular blog Unhappy Hipsters. The blog features photos and captions documenting new modern architecture and the people who live inside. Quinn calls her blog a "Dwell parody" that she created with her former co-worker Jenna Talbott. The two would send each other funny blurbs on modern living as a way to make each other laugh.

Quinn was born in Cape Cod, Massachusetts, and now lives in Portland, Oregon. While she studied at the University of Massachusetts, she majored in journalism and minored in political science.

During her four years at UMass, Quinn participated in an internship and co-op to gain experience.

"I participated in a co-op position at The Boston Globe, which helped me tremendously in terms of scouting and applying for positions after college. I also interned at FamilyFun magazine in Northampton. Together, these two internships helped me build a competitive résumé," Quinn said.

After college and before her blog became a hit, Quinn freelanced and worked for various magazines and organizations, including Boston Globe Media. Once her blog took off, she received offers from agents to turn the blog into a book. "It's Lonely In the Modern World" was published in October 2011 and has received rave reviews. The New York Times published a Q & A with Quinn and Talbott.

"The book is a riff on the blog and design books in general. It's a sardonic look at contemporary design and those who worship at the altar of design," said Quinn.

The book is published by Chronicle and is available online and in bookstores.