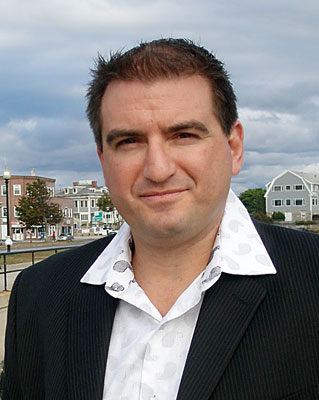 Marc Randazza, class of '94, had flunked out of UMass three times when Karen List cornered him in the hallway after he failed her latest exam and said, “You’re the smartest guy in my class and you just failed my exam. What the hell is wrong with you?” Then she told him that if he got an ‘A’ on the next two exams, he could still get an ‘A’ in her course, Journalism and Law.

After a slew of dispiriting teachers – in high school, they voted him “most likely to be dead or in jail by the time he’s 25” – Randazza was shocked and inspired to hear a professor tell him he was smart.

“Karen told me it, I believed it, and then I became it. I at least let myself become it,” Randazza said in a phone interview from Las Vegas, where he lives with his wife and two children.

Like his chance encounter in a UMass hallway, Randazza’s life is marked by a series of “funny coincidences.” As a graduate student in communication at the University of Florida, he changed the topic of his thesis to “vote pairing” 5 days before it was due. In the aftermath of the subsequent 2000 presidential election, the media sought him out for commentary on how the strategy could have changed the outcome of the race.

And later, while an unemployed Randazza was hunting sting rays on the Florida coast, a stranger with an inquisitive son offered him a job at his prestigious firm.

“Right place, right time is one of the themes of my life,” Randazza said. “I mean if I had not been walking down the hallway when Karen was in that mood that day, maybe I would have just gotten my 37 [percent] in silence and I would have said, ‘Yeah, whatever.’”

Randazza was also at the right place at the right time when the law school at Barry University in Orlando, Fla. needed someone to teach copyright and trademark law at the last minute. For three years of his life in Florida, Randazza took great joy in doing for students what List had done for him.

Randazza said his favorite students were the ones who passionately disagreed with him. He saw their opposing views as a contribution to what he calls the “marketplace of ideas”—a phrase he used several times in his interview. He said the First Amendment exists not to protect the speech we all agree with, but to protect voices of dissent. His belief stands even for speech that’s often deemed offensive. Randazza said “we owe so much to the ‘God Hates Fags’ people,” and his main client is an adult entertainment company.

“I definitely would give a trophy to the Westboro Baptist Church among the people and organizations that I despise but they’ve done a lot for us,” Randazza said. “They really have helped to protect the border of the First Amendment. It’s also the adult entertainment industry that has done that, more than anyone else.”

Randazza’s advice for journalism majors is simple: Get a good foundation in First Amendment law. He adds that students in the UMass Journalism Program should consider themselves very fortunate.

“Every bit of my success I got because of that program. My Georgetown law degree was just punching a ticket so that I could take a Bar exam. The foundation of what I do and what I am came from that program.”