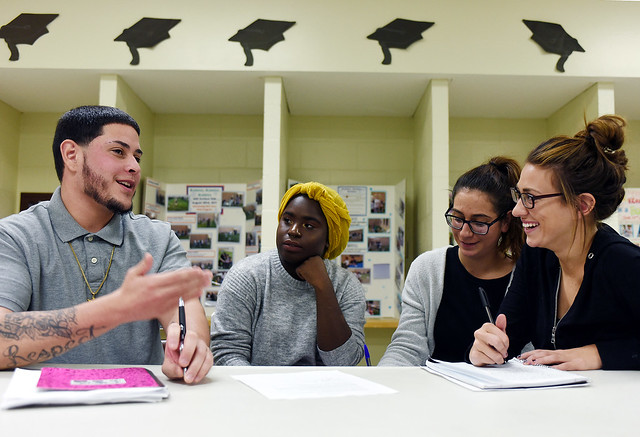 Seventeen UMass Amherst Journalism students passed through the metal detectors at the Hampshire County Jail and House of Corrections. As the sliding doors of the jail closed behind them, the students entered the visiting room where 10 Hampshire County jail students greeted them with smiles and handshakes. For the next two hours, the students would work side-by-side, poring over interviews, creating leads and discussing the structure of the articles they were assigned to write.

It was a typical Wednesday night for students enrolled in “Social Justice Journalism: Mass Incarceration,” an Advanced Writing/Reporting course co-taught by Senior Lecturer Razvan Sibii and Assistant Professor Shaheen Pasha during the Fall 2017 semester. [See the course syllabus]. The course, a pilot program in the Journalism department, aimed to provide both sets of students with an experience in journalism that they had never had before, through significant reading as well as active reporting. For the UMass Amherst students, the course was an opportunity to familiarize themselves with the American criminal justice system, identify its absurdities, its downright failures and its taboos and come up with ways to tell its many stories.

“The criminal justice system takes away their [the incarcerated people’s] freedom of speech. This class was truly a way to give a voice to the voiceless,” said Morgan Hughes, the lone junior UMass student in the class. “This type of storytelling has always been important to me, and the class opened my eyes to just how many stories there are to be told about the lives of those affected by mass incarceration.”

For the Hampshire County Jail students, the class provided a chance to learn the craft of journalism, from story conception to interviewing to writing, with the hopes of providing each individual with skills that they could use upon reentry into society.

Luis Santiago, one of the Hampshire County Jail students, said he found the class to be extremely stimulating. “The course helped me tap into my potential, as far as studying is concerned,” he said. “I’m a lot more hungry now – looking for education, looking for knowledge. I enjoyed that fresh info kept coming in every week, whether it was the [Ear Hustle] podcast, the readings or the conversations.” 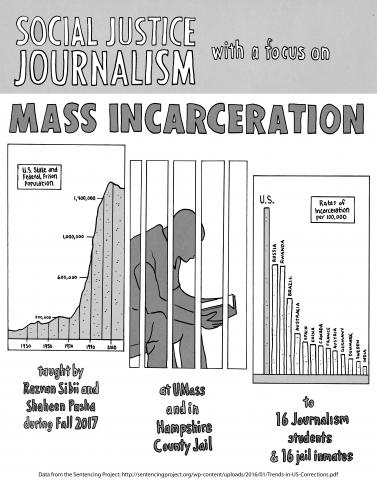 The class was the brainchild of Sibii and Pasha, who shared a passion for telling the stories of mass incarceration. In 2014, Pasha, who had recently been hired by the Journalism Department, volunteered to teach a media writing workshop at Hampshire County Jail with arts writer and author Peter Kobel. A year later, Sibii joined her for a 10-week intro to journalism workshop. They did it again in the summer of 2016. After that, they were ready to take it to the next level: offering a credited college-level journalism class in jail.

“I've always been passionate about telling the stories of vulnerable populations,” Pasha said. “Currently the U.S. incarcerates roughly 2.3 million people and once they go behind bars, their voices are often silenced. I wanted to create this class in order to provide a window for the public into the daily lives and issues faced by a huge segment of our population. But I wanted to do it in an immersive way so that our students were not outsiders trying to make sense of mass incarceration but were also the very people living this reality. I wanted our jail students to take the lead in navigating the stories that impacted them on a daily basis. And I wanted our UMass Amherst students to take the lead in teaching their fellow students in jail the skills they had learned as journalism majors.”

Sibii had recently developed a Social Justice Journalism course series that was meant to get students to read, discuss and report on issues related to underrepresented groups in American society. The first iteration of the course had focused on the topic of immigration, and MassLive.com had published seven of the students’ stories. The series seemed like a natural home for the mass incarceration course.

It was no easy task, navigating two large bureaucracies: the university’s and the jail’s. But after a mountain of paperwork and emails over three years, “Social Justice Journalism: Mass Incarceration” was approved by both UMass Amherst and the Hampshire County Jail, and received a Service-Learning designation. The jail recruited 10 incarcerated men with an interest in journalism. Sixteen UMass Journalism seniors and one junior enrolled in the regular University class section. The course began in September 2017.

A typical class started with a quiz on the week’s readings, which were usually comprised of chapters from Michelle Alexander’s “The New Jim Crow” and Wilbert Rideau’s “In the Place of Justice,” as well as articles from MarshallProject.org and other online outlets. After the quiz, the two instructors would either deliver a quick intro to some aspect of journalism (lead writing, interviewing best practices, quoting protocols, etc.) or facilitate a discussion about the week’s topic (parenting behind bars, education in jail, mental and physical health, masculinity, etc.). The last hour was usually reserved for workshopping stories. In groups of three, the students discussed story angles, potential sources and interview questions and wrote draft after draft for a total of 18 stories. Although the semester is now over, the students continue to work on all stories, with a goal of publishing them in an internal newsletter and pitching some of them to reputable news outlets. At the end of the course, all students earned four UMass Amherst credits, which can be transferred to most colleges and universities in America.

The co-instructors knew from the very beginning that the course would require a lot of work, in and especially out of the classroom. Even so, they were taken by surprise by how quickly the course took over their lives. “We poured our hearts into this class,” Sibii said. “I don’t think there was one day during the semester when we didn’t work on something related to the course, whether it was exchanging emails with the jail administration, dealing with some mini-crisis, suggesting sources to the students, editing story drafts, or applying for a grant. But it was well worth it. I think most everyone involved got more out of this course than they expected.”

That was certainly the case for Leah Gedies, one of the UMass students enrolled in the class. “This was my favorite course I’ve taken at UMass because it was the most interactive course,” she said. “I have never been to a jail or a prison, but being able to go and work with the men at Hampshire County helped me understand what jail life is actually like, and that it’s not what all the stereotypes make it out to be. I also loved that we were able to be the teachers and take the things that we have learned in our journalism courses to help other people who have never done this before learn. This was very rewarding to me because I know that some of the men in the class were very interested to learn about journalism, and maybe even continue with it after this class.”

It was the conversations between the two sets of students that proved particularly rewarding, as the students got to know each other over the 10 weeks and opened up on their personal experiences. Dakota Micks, a Hampshire County Jail student, was surprised at the “compassion” that the UMass students showed for the stories that their incarcerated colleagues brought to the table. “When you’re in prison, you learn to read people,” Micks said. “And you could see from the way they [the UMass students] talked to us, and the way they wrote about us, that they cared.”

Both Sibii and Pasha hope to continue to offer the class in the future and are pursuing projects to help develop it further. Pasha, who was recently awarded the Knight Visiting Nieman Fellowship at Harvard, is studying prison education programs throughout the country in the hopes of continuing to develop the immersive teaching model piloted in the Social Justice Journalism class. Sibii will be undergoing training by the Inside-Out Prison Exchange Program to explore the potential for expanding the class offering.

“Prison education has been shown to reduce recidivism and help incarcerated individuals with their job outlook upon release,” said Pasha. “Journalism provides tangible skills in writing, critical thinking and social communication that could prove invaluable to those who have been in the corrections system. We’re proud of our work and hope that this is just the beginning.”