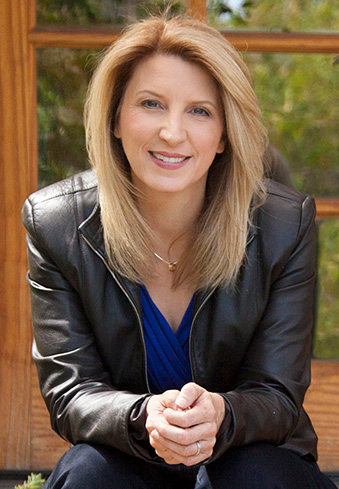 Janine Warner believed in the power of the internet to help bridge the information gap as soon as it launched in 1995.

In her 2015 Tedx Talk in Pura Vida, Costa Rica, Warner explains how the information divide is separate from the digital one: “Simply connecting the world to the internet is not enough. We also need to make sure that there is valuable information for everyone who gets there.”

Warner, who graduated from UMass Amherst in 1990 with a BA in journalism and Spanish, kicked off her career writing about the environment and immigration. She conducted interviews in Spanish for an English-language newspaper, but soon realized that the people she was interviewing needed the information even more than her English-speaking audience.

“Twenty years ago, when I started my career, if your only language was Spanish and you lived in northern California, there were precious few places you could get basic information about how to live in society,” said Warner.

"I started to realize that as an English speaker, I had this inherent advantage my whole life to having more sources of information than I could even use,” she said. Warner added that when she discovered certain populations, such as the immigrants in northern California, had almost no access to information, she decided to start her first newspaper.

At age 23, she launched a bilingual newspaper, which distributed at Sunday Mass and soccer games to Spanish-speaking immigrants who “didn’t even know to look for a newspaper in their own language.” She ran the paper for three years and “it failed terribly and wonderfully,” Warner said. Overall, she learned how difficult it was to run a business.

But the internet was going to change all of that. By 1995, Warner realized the most expensive part of publishing a newspaper was printing it. If it were digitally run, hosting fees would be about $10 a month. “Today we’re able to produce information in more languages, more locally, more connectedly than ever before,” said Warner.

“There are all of these journalists all over the world who have figured out that you can start a new media company more easily than ever before,” she said. “Today, for free, you can start a blog on wordpress.com and start an audience.”

Her quest to bridge the information divide formed much of the heart of Sembra Media, the nonprofit Warner founded in 2015. It helps digital media entrepreneurs become more sustainable and successful in producing quality content in Spanish. As the executive director, she works almost exclusively in Spanish with new publishers and digital media projects in Latin America. Now, 22 people work on the project in 15 countries. “I’m trying to help people not unlike that newspaper that I started in my 20s—but they’re doing it in a whole new way thanks to technology,” said Warner.

Warner has written and co-authored more than 25 books about the internet including, “Web Sites for Dummies,” “Social Media Design for Dummies” and “Global Mobile.” She has produced over 200 hours of training videos for companies such as Lynda.com and Creative.live. She has taught online journalism at the University of Miami and the University of Southern Carolina, and been a guest lecturer at more than 30 universities across the United States, Latin America and Europe.

Warner’s passion for journalism, technology and Spanish led her from an online managing post at the Miami Herald in 1998 to her current position as director of Latin American Operations for CNET. Her experience in new media and business has taken her to nearly 50 countries as a consultant, speaker and guest lecturer.

"If I have any secrets to success, it’s because I had that skill set that drove me to the basics of the internet to online learning and beyond,” Warner said.