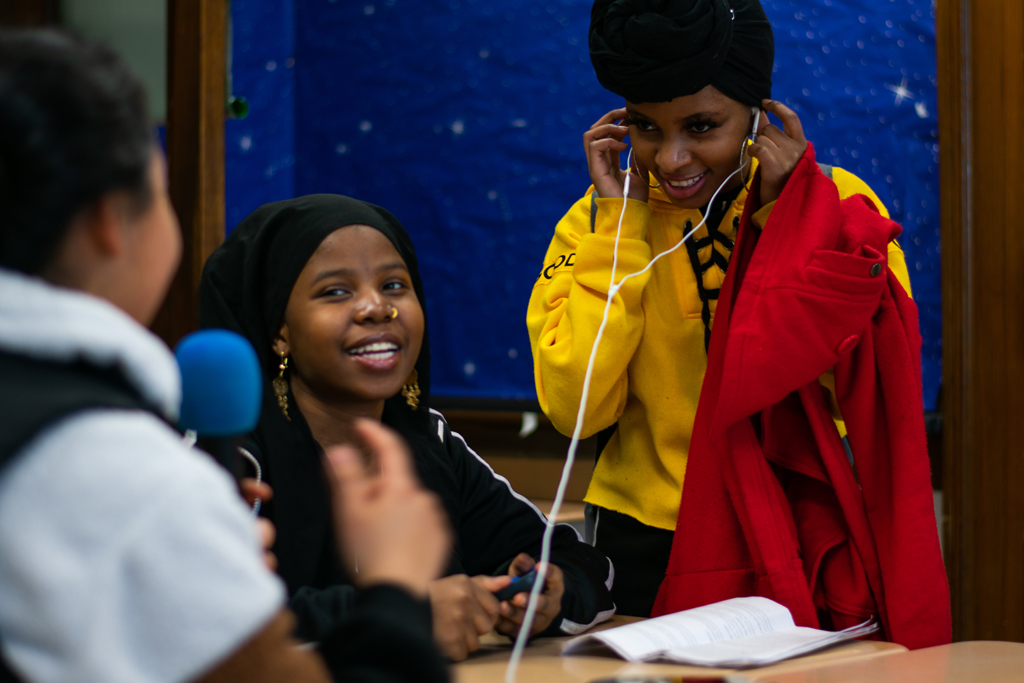 By Cassandra McGrath, class of '21

What began in 2008 as an independent study course within the Journalism Department at the University of Massachusetts, Amherst, has developed into a three-credit experience open to sophomore, junior and senior journalism majors. Others may sign up with the instructor's consent. Professor Nicholas McBride’s Community Journalism class brings his college-level class to the High School of Commerce in Springfield, Mass., thereby connecting two Western Mass. communities to create media.

Eleven years ago, one of Professor McBride’s students went to work at Commerce High School. “In those days, the school was experiencing a lot of difficulties. For example, the environment was rife with negative stereotypes and there was a gang presence. There wasn't any order, it was always a madhouse,” said Professor McBride. “But of course, Commerce, as you know, is not a stereotype. There has always been a squad of dedicated teachers there, and of which my student was one. He was just trying to figure out a way to make an impact within a chaotic situation. When we visited with each other, it's like a light came on. I said, well, why don't we try to teach journalism as a way to get at civics and literacy? And that's how it started.”

The class is shaped by the students every semester. Projects change based on the students’ interests. The class includes projects where college students interview high school students, students work in pairs or groups, and sometimes all students work together on a project about the community. Essentially, the opportunities are unlimited.

The course has created journalism in many forms, including utilizing NEPR Media Lab and incorporating podcasting into the class. Some stories have even been published by NEPR. “When NEPR was contemplating the organization of a youth media entity, which became Media Lab, they came to me for advice on what it should look like. I told them that it made no sense to reinvent the wheel. I shared with them the philosophy and approach of Community Journalism, so in truth, Media Lab was modeled on Community Journalism,” said McBride. After a national search, McBride’s son, Carlos was hired to direct Media Lab. What followed was a collaboration emphasizing reporting with audio, opportunities to write and create film documentaries. For example, two UMass student-athletes worked on a project about the football and track teams at Commerce High School. Students have incorporated other creative projects such as poetry and music into the class as well.

“There’s so much to say through the reciprocal intellectual exchange between the undergraduates and these high school kids who are mostly from minority groups and don’t have money. This is not a charity experience. It's a mutual appreciation society that ends up as this dynamic learning experience because these kids know about things that some people have only seen on TV or read in books. And they are resilient and they are surviving. They are more than surviving; they are flourishing despite, and in spite, of their lack of resources and lack of money,” said Professor McBride.

These kids are so brilliant and so talented,” Chesin said. “It's really hard to verbalize. I know I'm saying all these good things, but to experience a class is very, very influential and it will change the course of your college career. You won't regret it. You put so much work into the class and get so much more in return. You learn a lot and realize that many of the things you're doing is because you want to do them.”

In addition to Chesin, there is Brian Bevilacqua, who took the Community Journalism class six years ago, when he was a sophomore at UMass. “There were a lot of great people doing great work in that class in my sophomore year. By seeing all the people ahead of me, the juniors and seniors who were in that class, they kind of gave me a framework to go off. For the rest of my undergrad and four years after, I just stuck with it.”

After graduating in 2016, Bevilacqua began working at NEPR Media Lab, a job he said, “Nick is entirely responsible for, he is the reason I was able to get that job right out of undergrad.” Bevilacqua was drawn to Community Journalism because, “It seemed hands-on, rather than sitting in class talking about what we ought to do when we became journalists and started working with people. It was a chance to just go ahead and start doing it.”

Six years later it’s difficult for Bevilacqua to pick just one favorite Community Journalism class project. “There were writing pieces and photography pieces that the high school students did almost entirely with us acting as guides. There were truly collaborative pieces where a college student did the writing and a high school student took photos and did audio. Then there were also pieces where the UMass students did the journalism and wrote about what was going on in Commerce and what was going on in Springfield,” Bevilacqua said. “There was a lot of diversity.”

Bevilacqua emphasized how much of his passion for the Community Journalism class stems from the fact that communities, including Springfield, are underrepresented in the media. “There's this belief that there are injustices, that there are problems and shortcomings in our society, and that they desperately need to be highlighted. I'm glad to see that people are becoming more cognizant of the fact that certain communities, black and brown communities, just do not get the same kind of media attention. The systemic underfunding of high schools in Springfield, and in Holyoke, is the biggest news issue of our time that doesn't get discussed,” Bevilacqua said. “Once we get more diversity in news and journalism, we'll start to see a change with that.”

Bevilacqua has returned to UMass for graduate school to pursue teaching. “The idea is to host community journalism in my English/Journalism classroom next year or whenever I can. We'll know that the program will always have a home classroom,” he said.

Both Chesin and Bevilacqua remain inspired by Professor McBride’s teaching.

“All of his students are very committed because of the effect that he has on each of them. He wants to understand every point of view, and why each person cares. He pushes you,” Chesin said. “Especially through the readings and the discussions, and the things that we engage with each week. It's hard to even put into words, it's simply life-changing.”

“Nick McBride is the most impressive human I've met,” said Bevilacqua. Nick is a great professor, but he is a much greater human being. He is someone who cares for his students, both the UMass students and the Commerce students.”