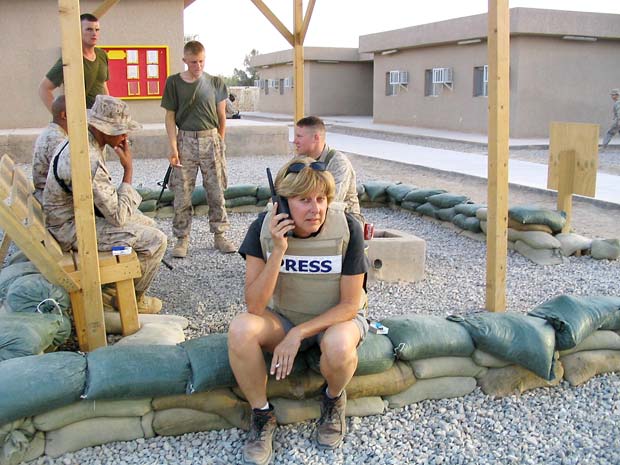 It’s five a.m. on Sunday, Feb. 26. While many people are still in bed Carol Rosenberg is waiting for a plane with government officials at the Andrews Air Force Base in Prince George's County, Maryland to a place not many have gone to. Guantanamo Bay.

For the last decade Rosenberg has reported on the detainment and interrogation facility of the United States located in the Guantanamo Bay Naval Base in Cuba for the Miami Herald. Or, as she called it on the phone, “The beat from hell.”

Of the beat, Rosenberg said “Gitmo has been the most difficult assignment I’ve ever had. I think that it was unimaginable and it still is troubling the amount of control the Pentagon tries to have over ordinary functions of journalism. You sort of expect that if you’re in a war situation, you expect that if you’re in a police state but getting answers to basic questions at a U.S. base shouldn't be so difficult."

The offshore detention facility turned 10 years old in January and it still holds about 170 captives, some of whom are said to be staging protests inside the prison.

It has been nearly three years since President Obama's executive order aimed to close it.

Rosenberg described Guantanamo's Camp Justice as a place where you can sit at your laptop or by your phone only if there is a member of the military within earshot. A place where a soldiers stand over your shoulder, looks in the viewfinder of a camera and says 'Don't take that picture, I'll delete it.’

She began reporting on Guantanamo for the Miami Herald in January of 2002, four months after the 9/11 attacks, and just prior to Taliban suspects arriving at the naval base. The base became her beat after a long discussion with her Rick Hirsch, her managing editor at the Herald, who told her, “‘This is in our backyard, it’s playing out in our hemisphere, it’s in Cuba, we care about Cuba, and it’s being run by an outfit called the Southern Command, which is an outfit based in Miami.’ And so, he told me to get down there and cover it as aggressively and completely as possible.”

Which she does. At least once every month, Rosenberg travels to the detention center in Cuba where she could stay has stayed for as little as four days and as long as 41 days.

When in Guantanamo, she stays with other reporters in an area called “Media Tent City.” It’s a place where “the ventilators and generators sound like you're inside a jet engine. Nearly everyone else expected in court gets housing elsewhere. The lawyers have trailers. The translators get townhouses and the judge and juries get guest quarters. The reporters get tents because if you protest, guess what they say: Don't come.”

Due to the inhospitable environment, Rosenberg said “there are very few people covering it. You have to really, really believe what’s going in is worth reporting to be there.”

She added, “I go to Guantanamo to write about a place the government intentionally chose to be outside the rule of law. The Supreme Court decided otherwise.”

Rosenberg said she is well suited to work in the difficult environment because of her experience in the Middle East.

“Because I reported from police states, I have operated with the assumption that someone may be listening in. I don’t like it, and I don’t think it’s particularly healthy in a democracy, or necessary, but I do the best I can.”

The University of Massachusetts alumna of the class of 1981 has been reporting in many different environments for 30 years. She began writing at the Massachusetts Daily Collegian during her freshman year and held several positions until her final year when she was the paper’s Editor-in-Chief.

She said she was drawn to journalism as a member of the post-Watergate generation when “Woodward and Bernstein made journalism quite respectable. I had watched the Watergate trials and was interested in reporting and then I got to UMass and I realized I could make a living out of it.”
Rosenberg added,“For me, personally, journalism allows you to be kind of like a voyeur, a first hand witness to important events without being a participant. Though this is cliche, it allows you to write a first draft of history.”

Following graduation, she was hired as a court reporter in New Bedford, Mass. Covering for a reporter on maternity leave, Rosenberg said, “It was a time limited position which they needed to fill. I covered murder trials and a lot of grizzly stuff right there in New Bedford.” The position allowed her to gain experience reporting in court cases which she said has benefited her throughout her career.

After her post in New Bedford, Rosenberg worked for United Press International in several offices throughout New England. In 1987, Rosenberg was hired as the Jerusalem correspondent for UPI. She said the position allowed her to become accustomed to working in the Middle East before she was hired as a foreign correspondent for the Miami Herald in 1990, on the eve of the Gulf War.

Recently, several reporters have died in the Middle East, most notably Anthony Shadid, Marie Colvin of the Sunday Times and French photographer Rémi Ochlik. Rosenberg said she knew them and the dangers faced by reporters covering the region. “I knew those people. There certainly were scary moments, and there certainly were times when one should be worried and anyone who wasn’t worried was naïve or foolhardy. Those reporters were reasonable people who would be afraid when it was appropriate.”

Despite being cautious, Rosenberg found dangerous situations to be inevitable at times.
She said, “there were close calls, I’ve been around car bombs and suicide bombs, where things happened that were certainly dangerous, but I wasn’t hurt.”

In the early 1990’s when a group of United States Marines were in Somalia, she traveled to the country with a small group of reporters. The group hired a few men as security who Rosenberg said, “decided there was more money to be made and they turned their guns on us as a group.” After approximately 24 hours, Rosenberg said they were able to negotiate a settlement and the group of reporters were let go.

While she said she didn’t feel threatened as a journalist, “there were times when being an American was uncomfortable in certain places, but I felt like I could talk my way out in those situations. In my opinion, when I was there all sides of the conflict were very interested in having foreign reporters there, and people wanted to tell their stories.”

For the way she has covered all sides of conflicts over the years, she has received praise from her bosses and colleagues.

In April of last year, she was awarded the Robert F. Kennedy Journalism Award, which recognizes outstanding reporting on human rights and social justice for her continuous coverage of the prison camps in Guantanamo Bay.

Rosenberg said she learned of the award when “someone from the Herald saw in the press release that I’d won the award and when they told me I didn’t believe them, so I looked on the web and there it was.”

“Carol’s work represents the best of what journalism is about: doggedly pursuing a story despite difficult conditions and reluctant sources. She has become the authority on this international story,’’ said Miami Herald Managing Editor Rick Hirsch.

Though it is difficult to be a reporter at Guantanamo, Rosenberg has no intentions of stopping, but rather will continue to press the government for more transparency as she submits clips for the “beat from hell.”