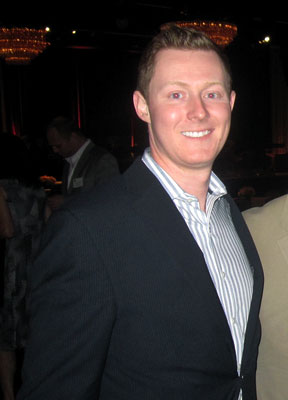 It’s a Monday morning, and on Friday, Bill Gallagher, class of ’05, is moving to Spain. The Worcester native is in pursuit of a story.

After studying abroad in Spain his junior year of college, Gallagher is returning with his Spanish girlfriend to document the experiences of people as they walk the Way of Saint James, the pilgrimage route to the Cathedral of Santiago de Compostela in Galicia, Spain. Tradition dictates the apostle Saint James is buried there.

“I’m not interested in the religious aspect as much as I am in people taking time out of their lives, spending one month, two months, three months walking 15, 20 miles a day. All they do is walk,” said Gallagher in a phone interview from his office at Harvard Business School Publishing. He coordinates videoconferences between professors at Harvard Business School and international executives.

Gallagher found the job after finishing work on the production team of the documentary “If a Tree Falls,” a film about radical environmentalists involved in the Earth Liberation Front. The documentary was nominated for a best documentary feature Oscar in 2012.

Gallagher said he always loved telling stories. He hasn’t always had the opportunity to do so, though– after graduating from UMass, he supplemented work as a photographer for the Boston Red Sox with a nonprofit job helping people with severe mental illnesses find employment.

“During that time I remember thinking, Would I like to be doing a documentary about this place more than actually doing what I’m doing?"

The answer was “yes,” and at 24 Gallagher enrolled in a graduate program in documentary filmmaking at the New School in New York City. He soon sought out and landed an internship on the production team for the documentary “Racing Dreams,” where he met director Marshall Curry. Curry later hired Gallagher to be the line producer for his next film, “If a Tree Falls.”

Gallagher credits a class he took with Journalism professor B.J. Roche for part of his journalistic and professional assertiveness. In an introductory reporting course, Roche regularly instructed Gallagher and his classmates to leave the classroom to go interview story subjects, he said.

Moving to Spain and making a documentary is Gallagher’s latest exercise in “getting out and doing it.” But the people Gallagher plans to focus on in his film are “getting out” in a more literal sense of the term. Gallagher wants to follow juvenile offenders who are released from prison so they can walk the Way of Saint James. The pilgrimage is considered to be therapeutic, said Gallagher.

"It becomes a walking meditation and a reflection on your life.”