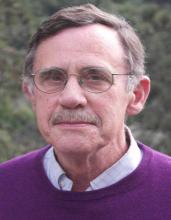 Professor Thomas P. Russell, polymer science and engineering, was recently honored by the Neutron Scattering Society of America with its highest honor, the Clifford G. Shull Prize in Neutron Science, for “his pivotal role in the application of neutron reflectivity and small-angle neutron scattering to polymer science and his important work on behalf of the neutron scattering community.”

The prize is named in honor of Shull, who received the Nobel Prize in 1994 with Bert Brockhouse for seminal developments in the field of neutron science.

Russell says, “I was truly honored with this recognition and was happy to have been able to have made a significant contribution to the field that has advanced our understanding of long-chain molecules in thin film and at surfaces and interfaces. It was equally rewarding to have worked with outstanding scientists at Argonne National Laboratory (ANL) and the National Institute of Standards and Technology (NIST) and a talented group of post-doctoral fellows and graduate students.”

In one of the latest COVID-19 response projects at the University of Massachusetts Amherst, the Advanced Digital Design and Fabrication (ADDFab) laboratory is collaborating with a global network of design, engineering and manufacturing experts to help develop an open-source N95 face mask.

ADDFab, one of the core facilities at UMass’s Institute for Applied Life Sciences, has been rapidly preparing 3D prints of prototype parts and molds for Cofab Design in Holyoke. Cofab business partner and design engineer Aaron Cantrell is one of primary leaders of the Open Standard Respirator (OSR) project, a“nonprofit effort to broaden protective equipment supply for COVID-19 and beyond.” The other leaders are biomechatronics engineer Matt Carney of the MIT Media Lab Biomechatronics Group and Philip Brown, assistant professor of biomedical engineering at Wake Forest University Baptist Medical Center. 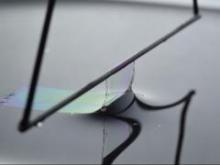 Recent correspondence in “Nature Materials” by a team of campus researchers answers a long-time question that experimental physicist Narayanan Menon says is “one of those things you should be able to look up in a textbook, a very basic question. But when you do look into the literature, there’s confusion, and it has been going on for decades. Our work isn’t screaming ‘new discovery,’ but this basic question is what we have clarified.”

In addition to Menon, the team included theoretical physicist Benny Davidovitch, polymer scientist Thomas Russell and a former UMass postdoctoral physics researcher, Deepak Kumar. He led the experiments and analysis for the report and is now starting as a new faculty member at the Indian Institute of Technology, Delhi. 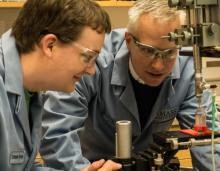 A type of damage in soft materials and tissue called cavitation is one of the least-studied phenomena in physics, materials science and biology, say expert observers. But strong evidence suggesting that cavitation occurs in the brain during sudden impact leading to traumatic brain injury (TBI) has accelerated interest recently, say materials scientist Alfred Crosby at the University of Massachusetts Amherst and his team.

Crosby is the senior author of a new “Perspectives” paper this week in Proceedings of the National Academy of Sciences. The researchers intend it to spark fresh discussion and drive collaboration among new communities of biologists, chemists, materials scientists, physicists and others to advance knowledge. They define high-priority goals and point out new opportunities in the field of how matter deforms and flows with cavitation. 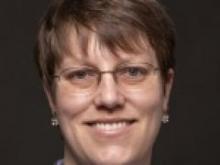 Sarah Perry, a chemical engineer at the University of Massachusetts Amherst, is studying a new approach to protein stabilization based on how cells work at body temperature. The research is aimed at boosting the accessibility of vaccines and other therapeutics, especially in developing countries, and extending the reach of temperature-stable proteins to sensing and catalysis applications.

The research is funded with a five-year, $657,920 grant from the National Science Foundation’s (NSF) Faculty Early Career Development (CAREER) Program. Perry’s Research Group is based at the Institute for Applied Life Sciences at UMass Amherst.

Formulations of vaccines or biologics come as solutions of protein in water. However, most purified proteins and vaccine formulations are extremely sensitive to temperature and must be kept refrigerated. In fact, the need to maintain refrigeration during the storage and transportation of these vaccines is a tremendous expense and logistical challenge for both doctors and patients. Maintaining this “cold chain” becomes even more daunting for people who take daily doses of temperature-sensitive biologics to treat diseases such as arthritis and multiple sclerosis. 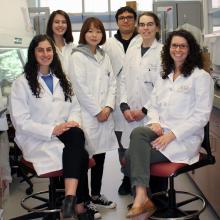 In an effort to combat a major source of serious bacterial infections, chemical engineers Jessica Schiffman and Lauren B. Andrews at the University of Massachusetts Amherst are studying how bacteria attach themselves to polymer materials used in biomedical devices such as catheters, implants, wound dressings and contact lenses. The goal is to help prevent infections by developing new biofouling resistant materials.

The research is funded with a three-year, $515,473 grant from the National Science Foundation (NSF) that supports fundamental research on how bacteria attach to polymer materials and how to re-engineer hydrogel-coated biomedical devices.

In a new paper, Thomas Russell and postdoctoral fellow Ganhua Xie, at the University of Massachusetts Amherst and Lawrence Berkeley National Laboratory, report that they have used capillary forces to develop a simple method for producing self-assembling hanging droplets of an aqueous polymer solution from the surface of a second aqueous polymer solution in well-ordered arrays.

“These hanging droplets have potential applications in functional microreactors, micromotors and biomimetic microrobots,” they explain. Microreactors assist chemical reactions in extremely small – less than 1 millimeter – spaces and microprobes aid new drug engineering and manufacturing. Both allow researchers to closely control reaction speed, selective diffusion and processing, for example. Selective diffusion refers to how cell membranes decide which molecules to allow in or keep out.

DOE says the award was given in recognition of Fink’s “outstanding academic accomplishments,” the merit of his research proposal, and his potential to make important contributions to the mission of the DOE Office of Science.

Fink says of the honor, “I am delighted to have been chosen to receive the SCGSR award and for the amazing opportunity to work with leading experts at Lawrence Berkeley National Laboratory. In addition to propelling my thesis research forward, this opportunity will also give me a sense of how research is conducted in a national lab setting. I am very excited to get started!” 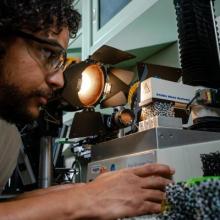 Materials Scientist Alumnus Featured by US Department of Commerce

Alumnus Marcos A. Reyes-Martinez, a materials research engineer at the National Institute of Standards and Technology (NIST), was honored by the U.S. Department of Commerce for Hispanic Heritage Month in October. He was chosen as one of only two employees to be spotlighted from among roughly 50,000 workers at the department.

Originally from the Dominican Republic, Reyes-Martinez earned his master’s degree in polymer science from UMass Amherst in 2011 and his Ph.D. in 2015. He completed postdoctoral studies at Princeton University and is currently a National Science Foundation fellow at NIST.

Ten researchers at the University of Massachusetts Amherst have been recognized for being among the world’s most highly cited researchers in 2019 by London-based Clarivate Analytics, owner of the Web of Science.

Now in its sixth year, the citation analysis identifies influential researchers as determined by their peers around the world. They have consistently won recognition in the form of high citation counts over a decade. These scientists are judged to be influential, and their citation records are seen as “a mark of exceptional impact,” the company says.