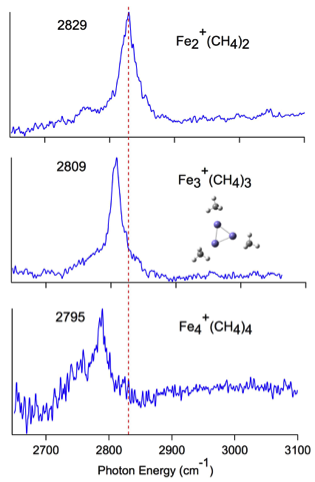 Transition metal centers are ubiquitous in nature. They are abundant in interstellar space and are vital reaction sites in systems ranging from industrial catalysts to enzymes. We use a combination of mass spectrometry and laser photofragment spectroscopy to study the vibrational and electronic spectroscopy of gas-phase ions containing a metal (M) center, determining their bonding, structure and thermochemistry. Density functional theory and ab initio calculations of the ground and excited electronic states complement the experiments. We study two classes of molecules: organometallic ions and metal cluster ions such as Fe3+(CH4) and [HO-Fe-CH3]+ that are models for transition metal catalysis, and ions such as Cr+(NH3) that probe solvation of M+.

A practical scheme to convert methane to an easily transportable compound would greatly increase the utility of natural gas as an energy source. We study activation of methane and larger hydrocarbons by metal ions, metal cluster ions and metal oxides in the gas phase, where we can learn about the detailed reaction mechanism from the spectroscopy of the reaction intermediates, reactants and products. Electronic spectroscopy mostly gives information on excited electronic states, while vibrational spectroscopy is an ideal way to study the metal-ligand bond and how interactions with the metal affect bonds in the ligand. For example, in the spectra of Fen+(CH4)n (left) the lowering of the C-H stretching frequency as n goes from 2 to 4 shows enhanced weakening of the C-H bond by the larger iron clusters. 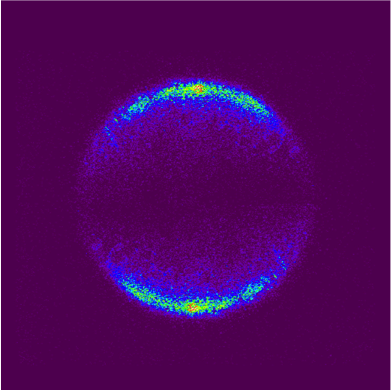 We also use photofragment imaging to study how molecules fall apart after absorbing light and to measure covalent bond energies in transition metal cluster ions and metal oxides. Measuring the relative velocities and directions of the fragments formed by photodissociation reveal the nature of the excited states (directly dissociative or predissociative), the extent of coupling between excited states, energy partitioning between translational and internal degrees of freedom, and bond dissociation energies.  We have recently built an instrument to do photofragment velocity mapped imaging of fast, mass selected, ion beams.  The image (right) shows Al+ fragments formed by photodissociation of Al2+ at 422.5 nm using vertically polarized light. The fragments are preferentially formed parallel to the laser polarization, indicating prompt, direct dissociation. The radius of the ring is proportional to the fragment velocity, which we use to precisely determine the Al-Al bond strength.