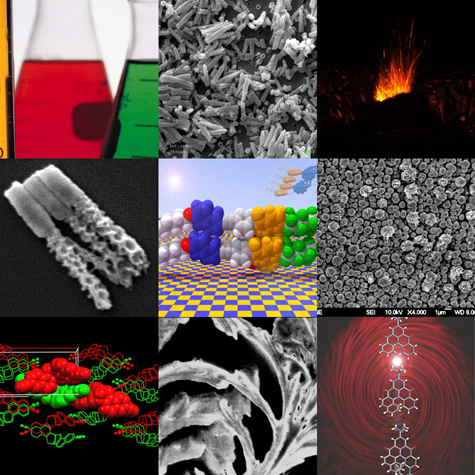 1. Hybrid Organic Inorganic Perovskites (HOIPs): Our vision is to design new HOIPs with improved stability and superior device performance for energy harvesting, and electronic applications. We aim to understand and exploit the mixed ion-electronic conduction properties of HOIPs for various applications. We are currently working to to elucidate the mechanism for ion transport in metal halide perovskites containing organic cations. We evaluate kinetics of ion transport in operando in a set of specifically-designed compounds in functional devices, and pristine thin films and single crystals using imepdance spectroscopy. We also use x-ray diffraction, Kelvin probe microscopy and other techniques to probe ion transport in these solids.

2. Organic Nanoparticles and Their Assemblies: Our vision is a supramolecular method that enables the fabrication of functional materials with hierarchical structural features through modular assembly wherein the modular components are encoded with sufficient information for three-dimensional self-assembly into targeted structures. We are developing supramolecular tools wherein organic molecular components are first assembled as NPs that are then used as building blocks for further assembly to create mesoscale structures. Through this method we aim to fabricate functional films with the tailored molecular order for each component on the nanoscale (<100 nm) and targeted assembly of the components on the mesoscale (>100 nm-100 μm). We have successfully fabricated organic photovoltaics and mixed ion-electron conductors using organic nanoparticles dispersed in water.