About the Minuteman Band

(As of September 5th)

The Minuteman Marching Band has long been a source of great pride for the University of Massachusetts and the surrounding region. Under the leadership of director Timothy Todd Anderson, associate director and percussion instructor Ian G. Hale, and assistant director and visual coordinator Christine Sirard, the Minuteman Marching Band has emerged as one of the nation's outstanding band programs. The band’s award winning drumline, large and powerful horn section, and modernized color guard are known for their enthusiasm, excitement and excellence. At home football games, the "Power and Class" performs its traditional Post Game show for hundreds of enthusiastic, dedicated fans who don't leave the stadium until the last note. 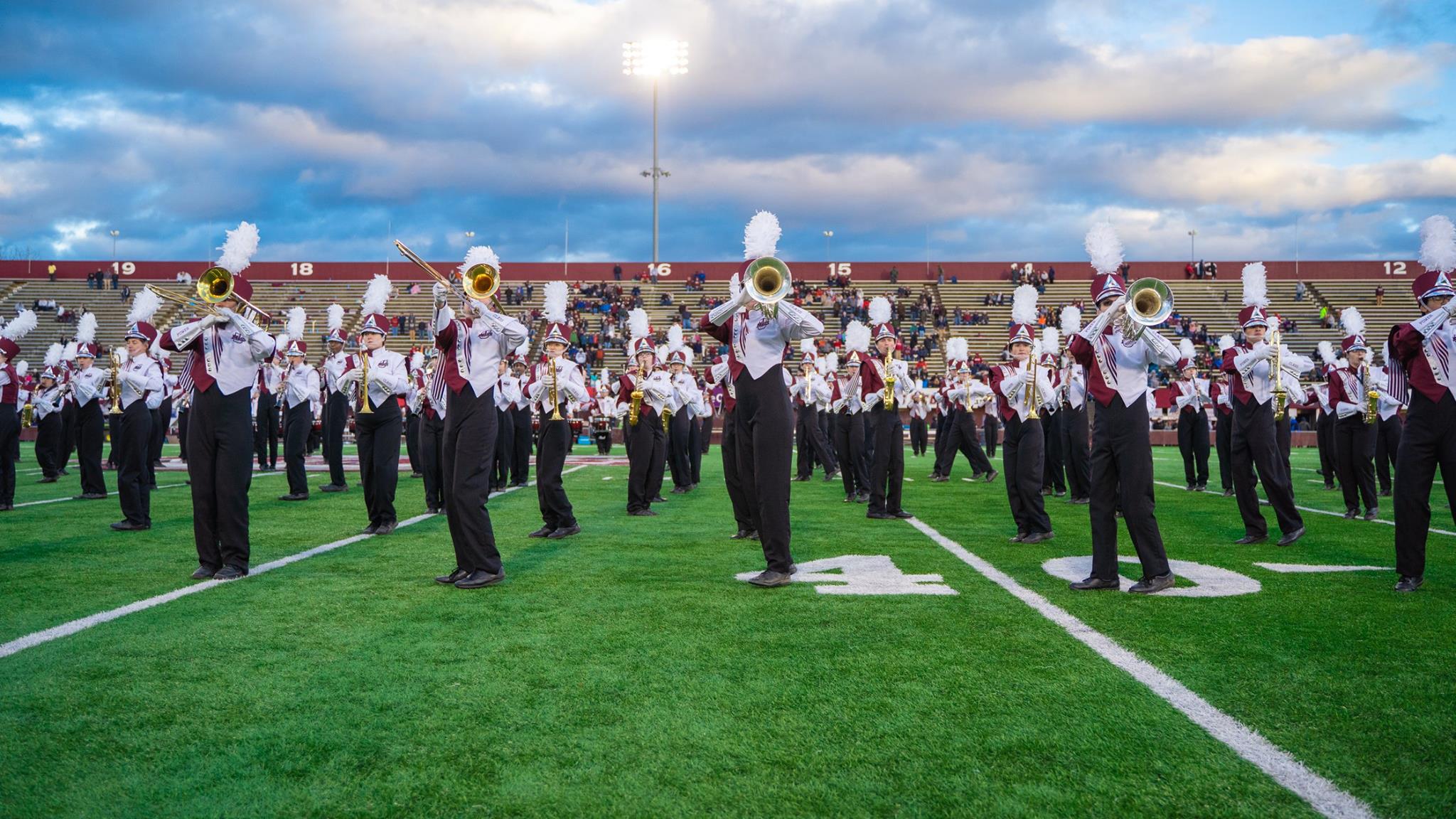 Over 380 students experience the excitement of college marching band at UMass. The Minuteman Marching Band has performed for Presidential Inaugural Ceremonies in 1981, 1985, and 2001. In 1993, 2001, 2004, 2007, and 2011, the band performed at Bands of America Grand Nationals. Other notable performances that the Minuteman Marching Band has participated in is the Macy's Day Parade in 2013, the Rose Bowl Parade in 2018, and the Patriot's 2018 home opener half time show. In 1998, the Minuteman Marching Band received the most prestigious honor bestowed upon college bands, the Louis C. Sudler Trophy, which is awarded in recognition of "the highest of musical standards and innovative marching routines and ideas, and which has made important contributions to the advancement of the performance standards of college marching bands over a period of several years."

The Department of Music and Dance enrolls 250 undergraduate and graduate music majors, who pursue a variety of degrees, including Performance, Education, Theory, Compositions, and African-American Music and Jazz Studies. The Department hosts 17 different instrumental ensembles. The Wind Ensemble program, under the direction of Dr. Matthew Westgate, has been highly acclaimed for its interpretation of the most substantive twentieth-century wind literature. The Jazz program, under the leadership of Jeffrey Holmes, has gained national and international recognition including top honors and major collegiate Jazz festivals, and many ensemble and individual citations from DOWNBEAT magazine's Annual Student Music Awards.

The UMass Hoop & Ice Band (also known as the UMass Sports Band) is the pep band that plays at every home Men’s and Women’s Basketball games and Men's Ice Hockey Games. The band rehearses on Mondays from 4:40-6:10 p.m. beginning in the mid-Fall semester and runs through the mid-Spring semester. The band also plays throughout the Winter Intersession whenever there are home games. In the past, the band has traveled with the basketball team to places such as the Mass Mutual Center in Springfield, MA, the Boardwalk Hall at Atlantic City, Pittsburgh, Washington DC, New Jersey, the Barclays Center in Brooklyn, and the Madison Square Garden in Times Square in New York City, New York.
There are auditions for Hoop & Ice Band that occur in mid October. To sign up for this band, enroll into MUSIC583 (Pep Band) through SPIRE, the University’s Administrative Website. 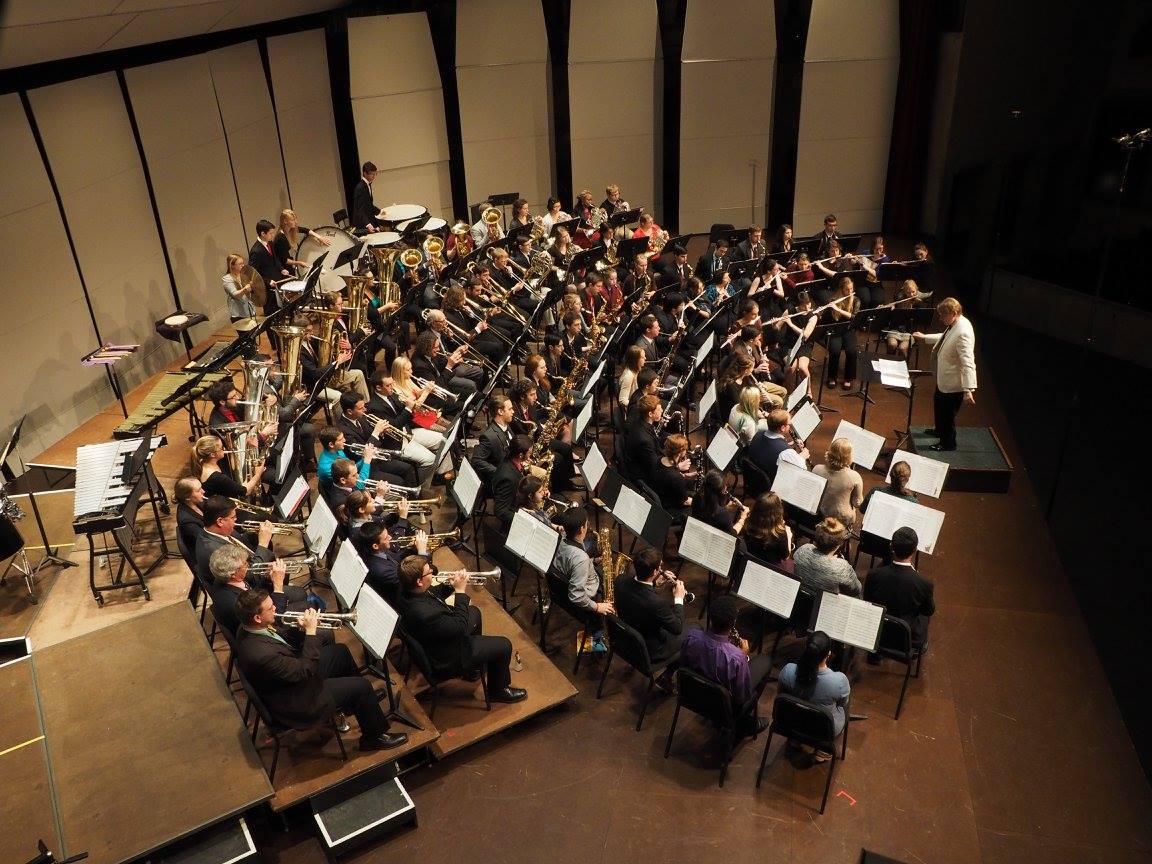 The University Concert Band meets from 7:30-9:30pm every Thursday in the Fall Semester, as well as from 4:40-6:10pm every Tuesday and Thursday in the Spring Semester. The Concert Band performs a variety of pieces ranging from Marches to Broadway to Mozart. The Concert Band is directed by Dr. Anderson. Everyone can join Concert Band, there is an audition process for seating purposes only. Many members use Concert Band as a way to learn a second instrument or strengthen their skills on their primary instrument. Many of the members tend to come from the Marching Band, however, you will meet several other people who come from several other departments wanting to play an instrument. To sign up for Concert Band, enroll into MUSIC569 (Concert Band) through SPIRE, the University’s Administrative Website.

Spinning in the Spring

When the marching band is not performing in the Spring, many members try their hand at spinning and twirling. The semester culminates with the annual Spinning in the Spring (formerly Color in the Cage) event where UMass ensembles are joined with local guards for a performance held in Totman Gymnasium.

The band features a few tech classes to further marching skills of any member.

Taught by Dr. Timothy Anderson, this course teaches students how to create a marching band show ranging from drill writing to musical arranging.

Taught by Ian Hale, this course teaches students the fundamentals of marching percussion including technique.

Taught by Chris Sirard, this course is an hour and a half of color guard basics rehearsal. We learn and rehearse our warmups and routines. At the end of the semester the Tech Class performs at UMass Spinning in the Spring.

The Amherst Community Band meets on Mondays, 6:00-8:00pm from June to August. The band gives 5 concerts during that time. This ensemble is open to anyone (not just students, but anyone in the community). Contact Dr. Anderson for more information.

There are numerous outstanding musical ensembles housed in the Department of Music and Dance that are open to all University students (some do require auditions). For more information on how to participate, please visit the Music Department's website: UMass Music Ensembles.

The University of Massachusetts, Amherst is a coeducational, nationally ranked research institution located in a beautiful, culturally rich New England town surrounded by hills, forests, lakes, and meadows, just a few hours from Boston and New York City. A public university, assisted by the Commonwealth of Massachusetts, UMass offers an excellent education at an affordable price. Its size, diversity, and the richness of its academic and extracurricular offerings, provide almost unlimited possibilities for personal growth and professional development. Each year about 18,000 undergraduates and 6,000 graduate students attend UMass from all 50 states and nearly 100 foreign countries. Students can earn bachelor's degrees in over 90 areas, master's degrees in 68, and doctorates in 50. In recent years, UMass faculty members have won an impressive array of the world's most prestigious awards, including: the Nobel Prize; the Pulitzer Prize; the National Book Award for Poetry; the Tanner Prize for Poetry; the American Book Award for Fiction; the Draper Award in Engineering; and numerous MacArthur, Guggenheim, Sloan, Woodrow Wilson, and Fulbright Fellowships.