Based on the Technoecologies exhibition at the Design Building Gallery of UMass Amherst, this talk reconceives the relationship between humans and their environment in architecture through prototypes and models that explore emerging forms of bioarchitecture, living systems, and evolving environments. Technoecologies exhibition proposes a metabolic architecture as a provocative alternative approach, being manifested by speculative yet tangible ways. Metabolic architecture is contemplated here both literally, and metaphorically. Literally, it deals with material transformations caused by either growth or decay of organic matter. Metaphorically, it relates to immaterial transformations of light or sound caused by environmental or artificial stimuli. Through these processes, metabolism within architecture becomes an apparatus that produces constant changes in form, space, and in user perception.

By bridging the gap between technophilia and technophobia, Technoecologies projects root into tradition and society to reinterpret in contemporary terms past history, culture, and traditional habits. With examples ranging from artificial sonic gardens and living wall prototypes to interactive models of seed banks, Technoecologies projects examine processes of material transformation, eventually generating a series of themes for architecture to consider, such as laboratory experimentation, objectification of nature, temporality and theatricality, the vernacular and cultural, modular and infrastructural elements, vulnerability and voyeurism, autonomy and complexity, as well as user participation. This exploration forms both a theory and a design approach, which subsequently advocate how art, technology, and architecture might progressively transform the environment, society, and culture.

Zenovia Toloudi is an architect, artist, and Assistant Professor of Architecture at Studio Art, Dartmouth College. Her work critiques the contemporary alienation of humans from nature and sociability in architecture and in public space, and investigates spatial typologies to reestablish cohabitation, inclusion, and participation through digital, physical, and organic media. The founder of Studio Z, a creative research practice on art, architecture, and urbanism, Zenovia has exhibited internationally, including at the Biennale in Venice, the Center for Architecture, the Athens Byzantine Museum, the Thessaloniki Biennale of Contemporary Art and the Onassis Cultural Center. She has won commissions from Illuminus Boston, The Lab at Harvard, and the Leslie Center for Humanities at Dartmouth. Zenovia's work belongs to permanent collections at Aristotle University (AUTh) and the Thracian Pinacotheca. Her essays have been published in Routledge, Technoetic Arts, and MAS Context. Zenovia is the recipient of The Class of 1962 Fellowship. She was a Public Voices Fellow; a Research Fellow at Art, Culture, and Technology Program at MIT; and a Fulbright Fellow. Zenovia received her Doctor of Design degree from Harvard's GSD (2011), a Master of Architecture degree as a Fulbright Fellow at the Illinois Institute of Technology (2006), and in 2003, she graduated from the AUTh in Architectural Engineering. 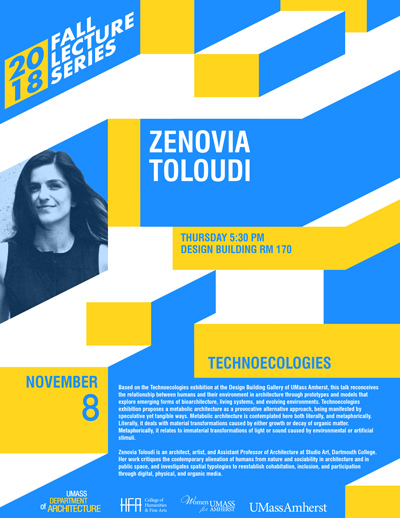